WHAT IS THE BEST THERMAL SCOPE FOR THE MONEY?

How to find the best thermal scope for the money?

The thermal scope is one of the most significant optical devices for hunting or long range shooting. Many people recognize the benefits of thermal scopes but often don't know how to choose it when it's time to purchase one. Admittedly, there are tons of thermal scopes on the market all promising to be the best at delivering value for the money. In this guide, you will learn everything you need to identify the best thermal scopes.

Finding the best thermal scopes for the money can be overwhelming but knowing the factors to look out for can help make your search easier. Thermal scopes are relatively pricey, so you want to be sure that the option you're considering meets some basic requirements. When you're on the look-out for the best thermal scopes on the market, here are some of the most important features you will need your scope to have.

It's widely agreed that the best scopes have exceptional zoom capabilities but it's vital to note that all scopes do not operate the same way. Some scopes use software, which is usually among low-end models, while others come with a lens that allow for enlargements. Before committing to make a purchase, be sure to establish that what you're buying comes with real lens that deliver real magnification.

3. Resolution of the scope sensor

When it comes to evaluating the quality of a thermal scope, one of the first things you want to check is the resolution of the scope sensor. It largely determines the visual performance of the scope as well the cost of the device. A higher resolution translates to sharper imagery and vice versa. Some scopes will have 800A-600 display but a thermal sensor of 320A-240, which means poor image quality. The best thermal scopes have an average of 640x480 resolution and their prices start from $1,000.

Thermal scopes have different applications, which reflect in their range capabilities. The best thermal scopes can identify targets up to 4,000 yards while entry level models can only deliver up to a range of 1,000 yards. The rule of thumb here is to go for scopes with large diameter lens and angle of view. The larger the diameter and angle of view, the greater the distance it can cover. Note that this spec is not the only factor responsible for detecting an object from a distance; sometimes, the object's size and contrast come into play as well.

The refresh rate is critical for aiming at moving objects. It refers to the number of times the frame of an image changes per second. The principle here is that the more a scope refreshes to capture a scene, the more it is able to deliver a clear picture of the scene. It's just like playing games on a screen - the higher the frame rate, the more information it is able to get to you. While the standard frame rate starts at 7.5 Hz, the best thermal scopes boast a refresh rate range of 30 Hz to 60 Hz.

·         Can you easily adjust the brightness, contrast and image gain? 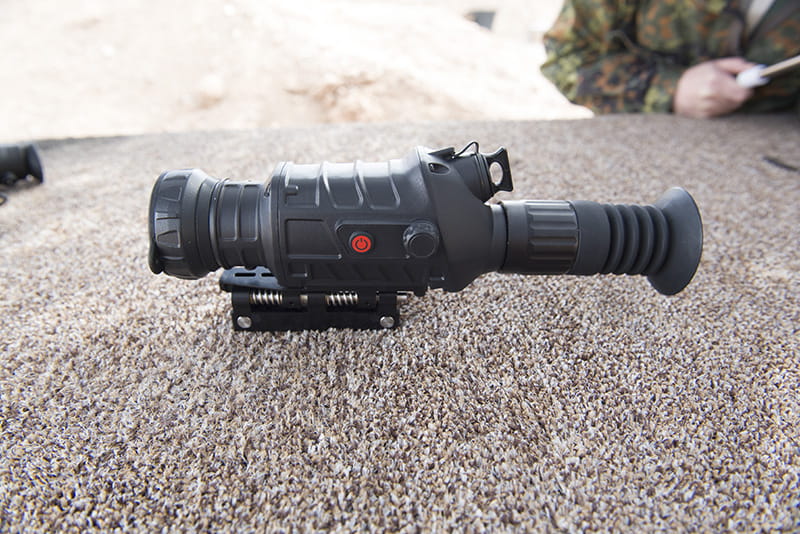 Available in three variants (namely TS425, TS435 and TS450), the Guide TS Series thermal scopes are highly rated for civilian use. They come with an array of features that deliver value for the money including 400x300 pixel resolution, waterproof and dustproof design and more - all at a reasonable price.

·    High frame rate: Where many rival scopes offer 30 Hz refresh rate, the Guide TS Series offer a 50 Hz refresh rate that ensures you get crisp, clear pictures even when the target is in motion.

·    Rugged design: The best thermal scopes should be able to withstand rough use and that's what you get from the Guide TS Series. They come with a waterproof and dustrpoof design alongside high shock resistance.

·    Zooming: You can zoom in on the center of the reticle without the position of the aiming point and reticle remains unchanged to ensure aiming accuracy.

·    Better than Night Vision: People who love to hunt at night will love the Guide TS Series because they are designed to allow you to acquire a target successfully than a night vision scope would. You will be able to detect your target from a long distance and even in the roughest weather.

Established in 2016, Wuhan Guide Sensmart is a subsidiary of Guide Infrared with more than 500 dedicated employees. The company has built a solid reputation over the years due to its quality products, which has led to its participation in more than 30 exhibitions around the world each year. Guide Sensmart focuses on development, manufacture and marketing of infrared thermal imaging products for commercial applications. How can you turn your smartphone into a thermal camera?